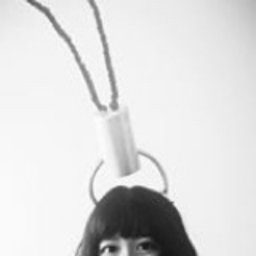 //This scene is for the exhibition of SICF21.// The title KA[K] is created by taking some letters from both color temperature (K as in kelvin) and a Japanese word, Kaiki (means: regression). There are three paintings: That day on the left (East side), One day on the right (West side) and Light wave on the centre wall. LED light wave image is flowing from the east to the west wall of the unit. As the LED color changing from warm to cold colors, the light image flowing from the east to west gets faster. If you look at One day on the west wall following the light stream, That day on the opposite wall is reflected there, and you can see a change of One day on a day. When this One day overlaps with That day, the light image becomes the brightestas interfered light waves merge together.I have combined that moment with AR (Argument Reality) and created KA[K] Ryukei in the worlds of two different time periods.The subtitle, Ryukei means light stream or time goes by. The word appeared in a poem by Chikamitsu Fujiwara, a poet in the Heian eara. Many people, nowadays, think the meaning of Ryukei as streams of scenery, just like those sceneries that we see on the Shinkansen or trains. On the other hand, if Chikamitsu Fujiwara were on those fast moving trains, how he would express the passing sceneries. From ancient times, our lives have been developed with lights of the sun. Our lives on the Earth have changed with understanding about the lights. Moreover, we have tried to understand about lights outside the Earth. For example, now we know that the color of the sunset on Mars is blue according to a Mars space probe. The colors of sunset are warm colors on the earth but it is different on Mars. In the distant future, we might live in the world with different light streams from that of we know now. As I am a person who lives in the current world, I have created this art work which may let you imagine a future on this planet.