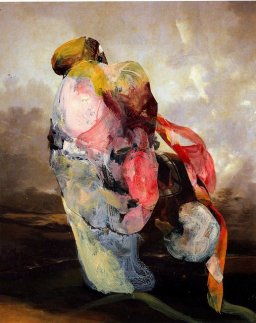 The work was inspired by an Aztec festival where a priest wore a human skin to become the god of corn and layered corn and structure. It consists of three parts: a description of the festival, UV development and skin simulation, and an area symbolizing VR and identity generated by the skin. While referring to Francis Bacon, who took images of the human body in photographs and films and turned them into paintings, and glimpsing the new representations possible in XR, I also visualized the bidirectionality of the presence and absence of the skin object, which appears sculpturally in the VR space but is not visible from the other side. I also intended to create a visual representation of object-oriented ontology by taking a structure in which the object itself is the object that makes the object exist and be recognized.